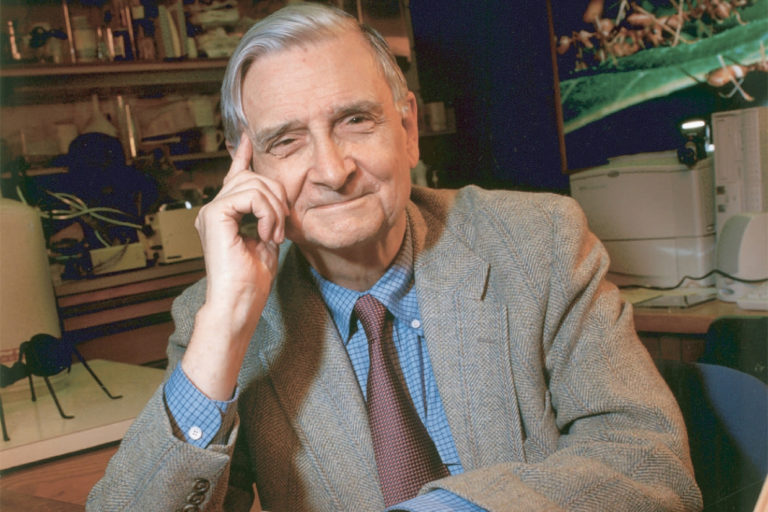 (Material in this post supplements Chapter 12 of Connect with Nature) The death occurred on December 26, 2021 of Professor Edward O Wilson, an acclaimed biologist, foremost naturalist and pioneering thinker. Widely regarded as Charles Darwin’s successor, Wilson transformed my understanding of myself, others and what it means to be human. My writing over the past 20 years including my recent book, Connect with Nature, was largely inspired by his insights, especially his concept of biophilia. This is the idea that evolution has shaped humans to have a close affinity with nature.

I am saddened by his passing.

Wilson is renowned for his work in several fields, notably myrmecology—the study of ants. Robbed of the sight in one eye resulting from a childhood accident, he was compelled to focus his biological investigations on the creatures he could see close-up. ‘Instead of birds, mammals, or fish, he turned to insects and eventually ants, a lifelong obsession and love—and a pillar of all his scientific work’.

But this did not confine the limits of what he could envisage and explore in his mind. He never lost sight of the ecological ‘big-picture’, for example. In collaboration with a gifted mathematician and ecologist, Robert MacArthur, he developed an equation predicting the number of species that could live in a natural area of a given size. The equation shows that as the size of natural areas decrease so too does the number of species that live there.

This relationship is inexorable and demonstrates the stark consequences for biodiversity of humanity’s pillaging and damaging of natural areas. Because of human activity, species are vanishing at a rate of 100 to 1,000 times the rate that would be expected otherwise.

In the last years of his life, Wilson addressed this existential challenge head-on. In a landmark book, Half-Earth: Our Planet’s Fight for Life, he challenges humanity to protect half of Earth’s natural habitat. At present we stand to lose half the world’s species because we are protecting only 10 percent of that habitat. Protect half of it and we save 80 percent of species. This would avoid the dire consequences of mass extinction and the disastrous ecological collapse towards which we are heading.

The half-Earth goal can be reached, Wilson argues, by a worldwide and flexible network of conservation areas. Some of these areas would be fully protected, but many would allow for the continuation of human activities and occupation. Acknowledging that indigenous peoples are often the best protectors of their land, Wilson stresses the importance of indigenous land rights in the half-Earth mission.

Wilson’s impassioned call to escape the global end-game in which we are all currently participating has not gone unheeded. The Half-Earth Project has been established and merits everyone’s support. This is a statement of its purpose:

With science at its core and our moral obligation to the rest of life at its heart, the Half-Earth Project is working to conserve half the land and sea to safeguard the bulk of biodiversity including ourselves.

As Wilson reminds us: ‘We ourselves are part of the living world and the only species with the intelligence and thereby the moral responsibility to serve as its caring steward’.

As a global citizen, and using my unique skills and abilities, I pledge to: